Yes! We are open!
We are accepting and shipping orders
Delivery times may be longer than usual on overseas shipments.

COINS OF THE POPES

During World War II the Vatican was in a difficult position, torn between its Christian duties and the need to cooperate with Fascist Italy which granted the Vatican its independence in 1929.  We are pleased to offer the following coins of the Vatican struck during these difficult war years.  The 1941 50 Centesimi depicts Archangel Michael drawing his sword.  The 1941 1 Lira depicts the Virgin Mary standing on the globe and a crescent moon.  The 1942 2 Lire features Justice seated holding a scale and the tablet of law.  The obverses of all three coins have the Papal Arms of Pius XII which feature a dove holding an olive branch.  The coins are struck in stainless steel.

Though Pope John XXIII reigned only from 1958 to 1963, yet he was one of the most beloved and influential of the modern Popes. He started the Second Vatican Council which implemented many reforms of the Church. In 2014 he was canonized a Saint.  This 27.75mm stainless steel Vatican 100 Lire of John XXIII depicts the Pope on one side and Fides (faith) holding a cross on the other.

The coins in this official 1967 Vatican eight-coin mint set of Pope Paul VI were struck only a single year.  The Pope is depicted on the obverses of all the coins except the 1 and 2 Lire, which feature his Papal arms.  The reverses of the silver 500 Lire and the aluminum-bronze 20 Lire depicts Saints Peter and Paul. The 100 Lire features Saint Peter upon a throne on the reverse.  The reverse of the 50 Lire pictures Saint Paul being thrown from his horse.  The aluminum 10, 5, 2 and 1 Lire coins have different depictions of the Keys of Saint Peter on the reverse.  The 5, 10, 20 and 500 Lire are unusual that they do not carry an AD date. They are dated only by the year of the Pope's reign (Year 5).  The 1, 2 and 5 Lire were only available in the Mint Set.  Only 100,000 sets were produced.  It is an attractive set from a popular Pope. 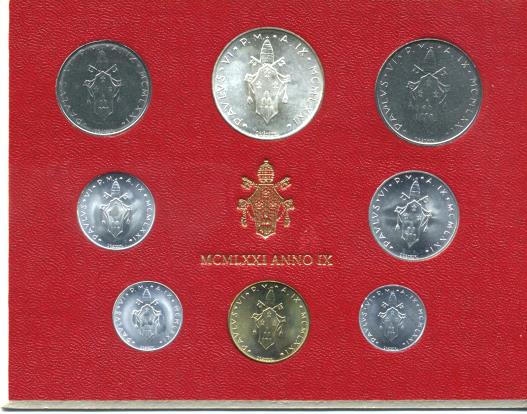 We are pleased to offer these official Vatican Mint Sets of Pope Paul VI in their original holders.  The sets date from 1971 to 1976 and include the silver 500 Lire.  The sets all feature the same designs. One side of the coins features the Papal arms.  The other side features a design with religious symbolism.  The 1 Lire features palm branches.  The 2 Lire pictures a lamb.  The 5 Lire shows a Pelican feeding its young with its blood.  The 10 Lire pictures fish.  The 20 Lire depicts a red deer drinking.  Olive branches are on the 50 Lire.  A dove in flight carrying an olive branch is on the 100 Lire. The silver 500 Lire depicts wheat and grapes.  The coins are all Uncirculated, however some may be slightly toned.

Every 25 years and for special occasions, the Pope declares a Jubilee or Holy Year.  It is a special year for reconciliation and the pardon of sins.  It is often celebrated with pilgrimages to Rome or other sites. The tradition dates back to an ancient Hebrew custom of Jubilee mentioned in Leviticus 25:10 and has been celebrated regularly in the Catholic Church since 1300.  Special coins were minted for the 1975 Jubilee, utilizing designs unique to the year featuring biblical stories on the reverse and the Papal Arms on the obverse.  This 1975 Holy Year set includes the set includes the 5, 10, 20, 50 and 100 Lirein Uncirculated condition. in itts official HolyYear holder.
Item VA-5HOLY75 VATICAN 1975 5 COIN HOLY YEAR MINT SET: 5 - 100 LIRE, (KM-MSA80) BU $8.00

Pope Paul VI reigned from 1963 to 1978.  He implemented many of the reforms of the Second Vatican Council and was the first Pope to leave Italy since 1809.  This Uncirculated 27.75mm stainless steel Vatican 100 Lire of Pope Paul VI depicts the Papal Arms on one side and a dove in flight holding an olive branch on the other.  The coin was issued from 1970 to 1977. 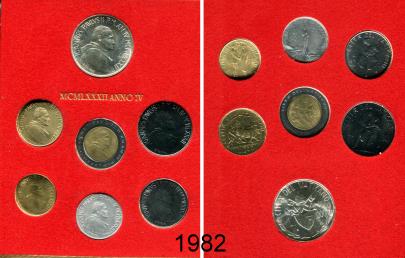 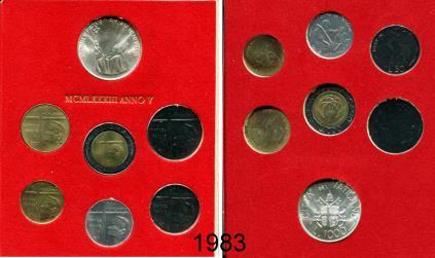 These attractive Vatican mint sets of Saint Pope John Paul II includes the silver 1000 Lire, bi-metallic 500 Lire, aluminum-bronze 200 and 20 Lire, stainless steel 100 and 50 Lire and aluminum 10 Lire.  The reverse designs of the coins were changed every year, and each year has a different portrait of Pope John Paul II on the obverse.

Pope John Paul II was the first non-Italian Pope since 1523.  The Polish Pope was one of the most widely traveled leaders in history, visiting 129 nations during his pontificate. He reigned from 1978 to 2005.  The beloved Pope was canonized in 2014. This 6 coin set from the Vatican includes the 10, 20, 50, 100, 200 and bi-metallic 500 Lire all depicting the bust of John Paul II.  Coins date from the 1980’s and have various reverse designs.  All six coins are Uncirculated.

The Vatican issued this 2013 dated bi-metallic 2 Euros coin to commemorate World Youth Day held in Rio de Janeiro in July 2013.   The week-long event brought over 3 million attendees from throughout the world.  The coin features youth gathered within the embrcing arms of Christ.  The reverse has the standard 2 Euros design. The coin comes in its official green holder and has a mintage of only 94,000.

PAPAL COINS FROM AROUND THE WORLD:

POLAND HONORS THE LIFE OF THEIR POPE

Poland issued this 2 Zlote coin in 2005 shortly after the death of Pope John Paul II.  The Polish born Pope was the first the first non-Italian Pope since 1523.  One side depicts the Pope ith an outline of St. Peter's Basilica in Rome in the background.  The other side features a stylized Polish Eagle.  The 27mm coin is struck in a brass alloy called "Nordic Gold".

The beatification of Pope John Paul II on May 1, 2011 is commemorated on this 2011 tri-metallic 10 Dollar coin issued for the Antarctic Territories. One side of the 27mm coin pictures the Pope. The other side shows a map of Antarctica. There is a certain irony in a coin being issued honoring the Pope by the only continent that the Pope never visited.
Item ANTARCTIC-POPE ANTARCTIC TERRITORIES TRI-METALLIC 10 DOLLARS 2011 UNC. $29.50

Because of its remoteness in Antarctica, most of Marie Byrd Land has not been claimed by any sovereign nation, though it has been claimed by various micro-nations such as Westarctica. It was named by explorer Admiral Richard E. Byrd in 1929 after his wife. I am sure she deserved it for putting up with his numerous explorations and adventures. In 2011 a trimetallic 10 Dollar was issued for this remote area. One side of the 27mm coin pictures Pope John Paul II and commemorates his beatification on May 1, 2011 The other side shows a map of the territory and a penguin.

This unofficial bi-metallic 100 Ruble coin picturing Pope John Paul II was issued for The Moldavian Republic of Dniestr, also known as Transniestria or Transdniestra. The national arm featuring a hammer and sickle and a star is on the back of the 2011 dated coin.  The small, communist state bordering the Dniester river declared independence from Moldova in 1990.  Though its independence is not widely recognized, it operates as a sovereign nation.  The 26mm coin has a mintage of only 2500 pieces and is Uncirculated.

In 2007 five African nations:  Cameroons, Central African Republic, Chad, Congo Republic and Gabon, each issued a bi-metallic 4500 Franc coins to commemorate a visit that Pope John Paul II made to their country.  The coins were made by the Africa Mint, which had questionable authority to issue the coins.  The coins have a mintage of only 2007 pieces of each coin.  Due to a fortunate purchase we are able to offer these scarce coins far below their original issue price of 50 Euros ($60) each.  Each coin pictures the Pope and lists the date of his visit   The Central African Republic and Congo issues also show an airplane, while the Chad issue also shows the Popemobile.  The reverse of the coins all show a map of Africa and an elephant head. Because these nations use the common currency of the Central African Monetary Union they issue few coins of their own.

I am not sure why a good Muslim nation like Somalia would honor Pope John Paul II.  Anyway, in 2004 Somalia issued a set of three 38.7mm copper-nickel 25 Shilling coins titled "THE LIFE OF POPE JOHN PAUL II"  The coins depict the Pope at a window in the Vatican, the Popemobile and the Pope with Mother Teresa.  The Arms of the Somali Republic is on the reverse of each coin.   It is an interesting set of crown-sized Pope coins at a reasonable price.

Cameroons issued this bi-metallic 4500 Franc coin shortly after the ascension of Pope Benedict XVI in 2005.  The coin features a terrible, toothy portrait of  Pope Benedict XVI.  It makes the Pope look like a vampire.   A map of Africa and an elephant's head is on the reverse.

TABLE OF CONTENTS FOR THE INTERESTING STUFF CATALOG

ALPHABETICAL LISTING OF COINS AND BANKNOTES IN THE INTERESTING STUFF CATALOG 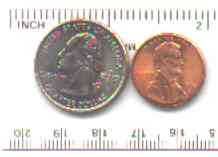 scale with which to judge image sizes

All items are guaranteed to be genuine, unless clearly indicated otherwise.
NOTE:  All pictures are of a typical item taken from stock.  Because we have multiples of most items, the item you receive may not look exactly the same, however it will be as described.